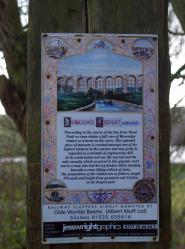 It was a mild winters' day with a little (not enough!) sunshine, so we took ourselves off to Hewenden Viaduct (this can also be found on Google maps as Thornton Viaduct).

At 123 feet high, it was the second highest Viaduct in England when it was built.

It is now Grade II listed and forms part of the Great Northern Trail Footpath.

Other galleries in category: viaducts

There are no other related galleries in this category